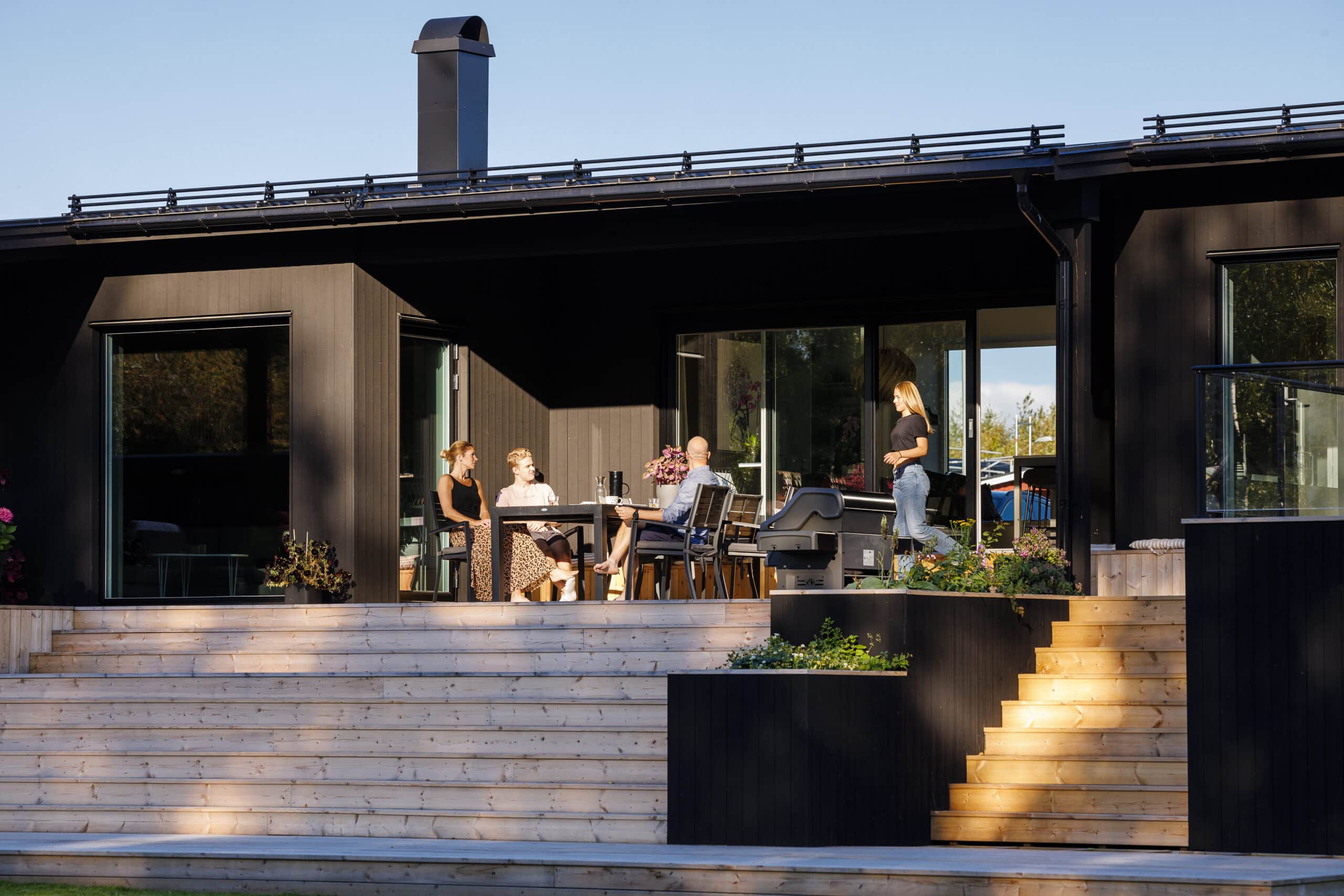 At home with the Hedberg family

An architect-designed home with a sloping roof, a terrace with stairs and large windows facing the river. That’s what came to be when Jonas and Johanna found their dream location and decided to build a house. Welcome home to the Hedberg family in Boden. ”We are close to everything here,” says Johanna.

Johanna and Jonas Hedberg, both with deep Boden roots, have been climbing the housing ladder for many years and renovated their way through co-op flats, terraced and detached houses.

”We have always been very interested in houses and interior design and thought it would be fun to build a house at some point”, says Jonas.

Jonas, Johanna and their teenage children Gustav and Agnes actually liked their previous house in Sävast very much, so much that it would take something extraordinary to set them on the move once again. Then they stumbled upon this plot. Or, actually ran into is a better description, because it was during a run along Bodån that Jonas noticed that this fantastic location in the Sanden area, a stone’s throw from the town centre, was unoccupied.

”The frontages of the houses here are quite discreet, but the back sides are super nice, with the river and the walking path below, and lots of sunlight. And so close to town. With the plot sloping, it is possible to make it a little more lively than if you have a classic flat plot of land. We also saw an opportunity to come up with something different”, he says.

The plot was already sold, but since the owners did not start construction it went back to the municipality and then the Hedberg family had the chance to buy it. And that’s where it all started.

”So instead of doing Covid renovation, we built a house”, Johanna explains.

CLEAR VISION OF A NEW HOME

The couple started by creating an ideas book for their house project where they wrote down exactly how they wanted it, pasted in magazine clippings and described the style, colour, shape and features of their dream house. They also sketched floor plans before contacting architects and builders and finally chose the architect Josefina Nordmark and Norrläge as their builders.

The entrance is in the middle of the long narrow house, next to the large kitchen. On the left are the teenage children Agnes and Gustav’s rooms, their TV room, bathroom with sauna and a door to a spa bath out on the terrace. To the right is the laundry room and storage room and then the living room, the parents’ bedroom and a smaller bathroom.

”We wanted it to be open plan, but not for the kitchen and living room to be completely joined together, because it would be too echoey”, says Johanna.

”We wanted to create distinctive sections in the house. When you have small children, it is perhaps natural to have all the bedrooms close to each other, but now our children are not small anymore, so now we prefer having it divided into their part and our part”, says Jonas.

The street has many houses with basements, but Jonas and Johanna definitely wanted a single storey, for the sake of simplicity. The whole house has a sloping roof that follows the incline of the ground, from the highpoint falling away from the street, sloping down towards the back, as per to the architect’s proposal.

”We immediately felt ’Wow, this turned out right’”, says Jonas.

The floor also has a small difference in level, the living room and master bedroom are a couple of steps down, which means that the ceiling height is still 2.50 metres at its lowest.

From the front door, a straight line of sight runs through the house to a large window overlooking the back garden, green spaces, some birch trees, the footpath and the glistening river below. Here, in front of the window, you can pause for a moment and take in the nature outside.

”It’s wonderful that the first thing you see when you come in is the outside”, says Johanna.

From the beginning, they had not intended to have a window facing the street, but they ended up with a giant window by the dining area. It is however positioned so that it is possible to be in the kitchen without being seen from the outside. The deep bay window is decorated with blankets and cushions and has the same function as a kitchen sofa.

”It’s exactly those kinds of smart solutions that the architect has been good at putting together”, says Jonas.

For the interior, they have chosen to work with uniform and modern expressions that are repeated throughout the house. The same grey tiles are found in both bathrooms, the hall and the laundry room, albeit in different sizes.

The house’s interior walls are three shades of grey, with the darkest being the same colour code as the kitchen doors. An interesting detail is the pantry, which looks like an ordinary tall cupboard but is so large that you can walk into it.

”The kitchen was definitely the first thing we decided on, it’s the most important thing. The kitchen is the heart of the house, it’s where we hang out”, says Johanna.

Lime washed oak floorboards with a matt-lacquer finish are found in all common areas. Throughout the house, there are also black details that give weight and contrast to the otherwise airy environments.

The facade of the house consists of vertical slatted panels in three different widths, painted in a matte black Swedish flour paint, except for the back where the facade is smooth for a calmer and cozier impression.

”We like being outside in the spring, summer and autumn, and we like to have different little nooks and crannies, sun walls and wind-sheltered corners. Together with the architect, we made sure that the back was irregular to create these small outdoor spaces”, says Jonas.

Out the back, Jonas has built a terrace of around 200 square metres, divided into different sections, heights and stair sections with and without roofing.

A PLACE WITH A VIEW

”The plan has been quite clear, we wanted it to slope quite steeply, so that you can really feel that you’re up on a height. There is a concept based on how the windows and everything are laid out, but at the same time it should still be a little wild so that it doesn’t just look like a flat dance floor”, says Jonas.

Designing each level required a lot of maths and many drawings on tracing paper, but also about 1,800 running metres of slatted flooring and many, many hours of work.

”It is absolutely wonderful, the deck. It’s been lovely this summer, but we actually sit outside all year round here at the dining table”, says Johanna.

In the summer of 2021, the house was completed and the family moved in.

”We are very pleased with how everything turned out and how the process worked. Dealing with the construction company and the craftsmen has been very smooth”, says Jonas.

And they thoroughly enjoy their närhetsliv*. In just ten minutes on foot or by bicycle, they can reach shops, community services, sports facilities, schools and Johanna’s job in the city centre. Jonas often works from home, but thanks to good communications he can be at the Stockholm office, 1,000 kilometres south of here, even before his colleagues arrive.

Still, you will mostly see nature when you look out of the windows.

”I like it very much here, it’s fun that it’s so new and it’s close to town. It feels like it’s close to everything. It’s close to the school and I can easily get to visit friends and to my football and handball practices”, says Agnes, 14 years old. #

*Närhetsliv / We call our lifestyle “Närhetsliv” [nair-hits-leev] – a Swedish word for life close to everything important and more – work, school, culture, housing, kids’ activities, shopping and nature, like proximity life. 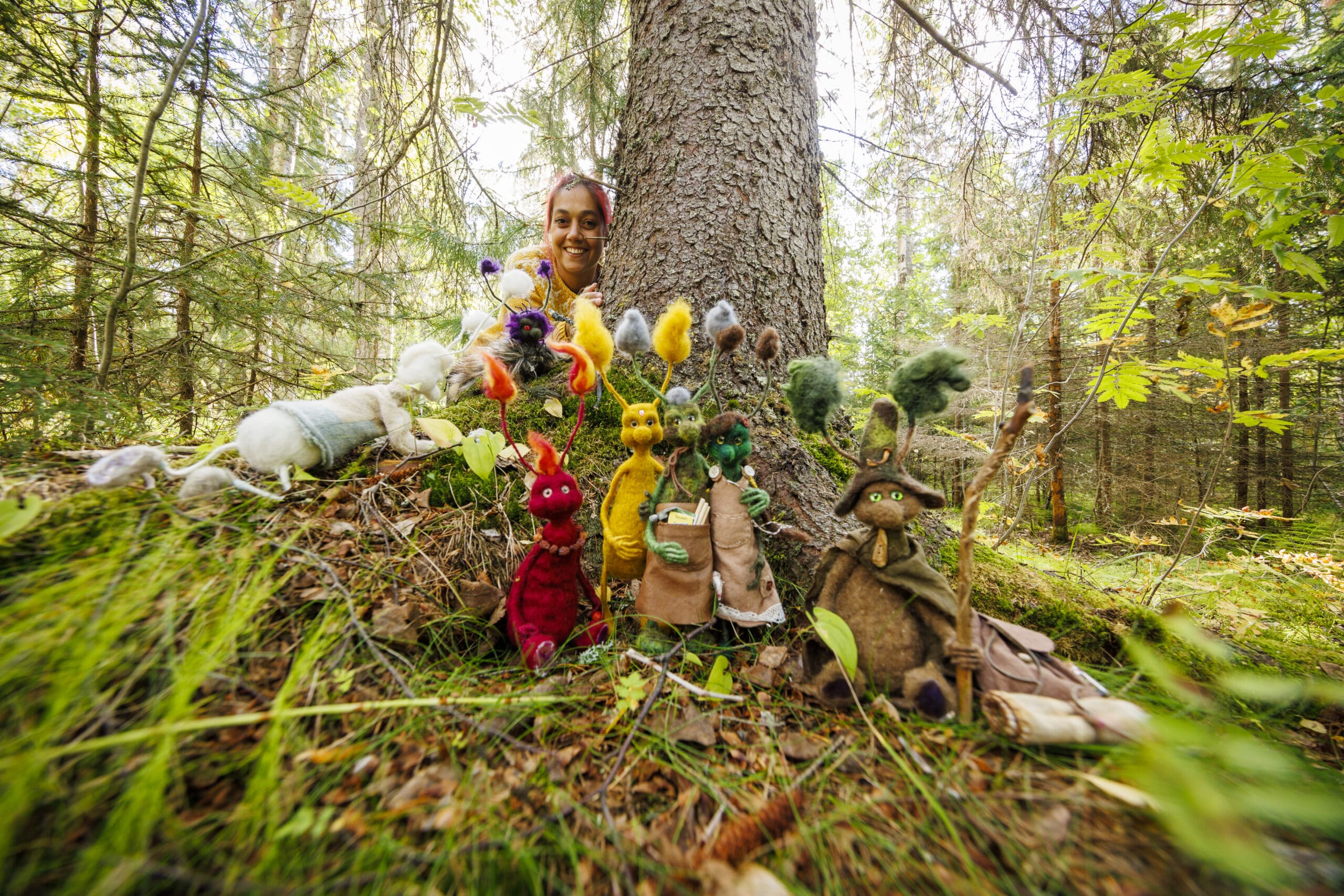 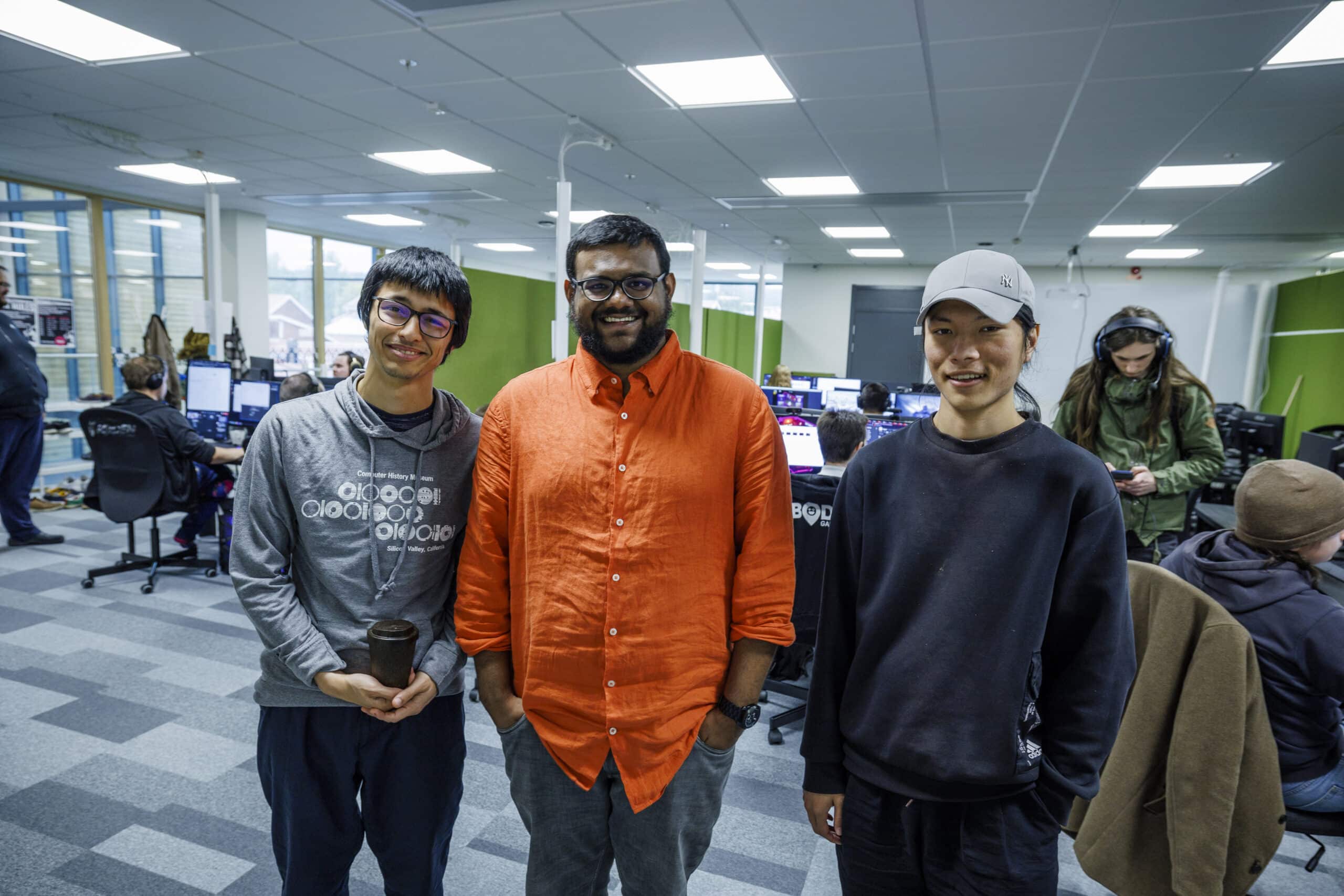 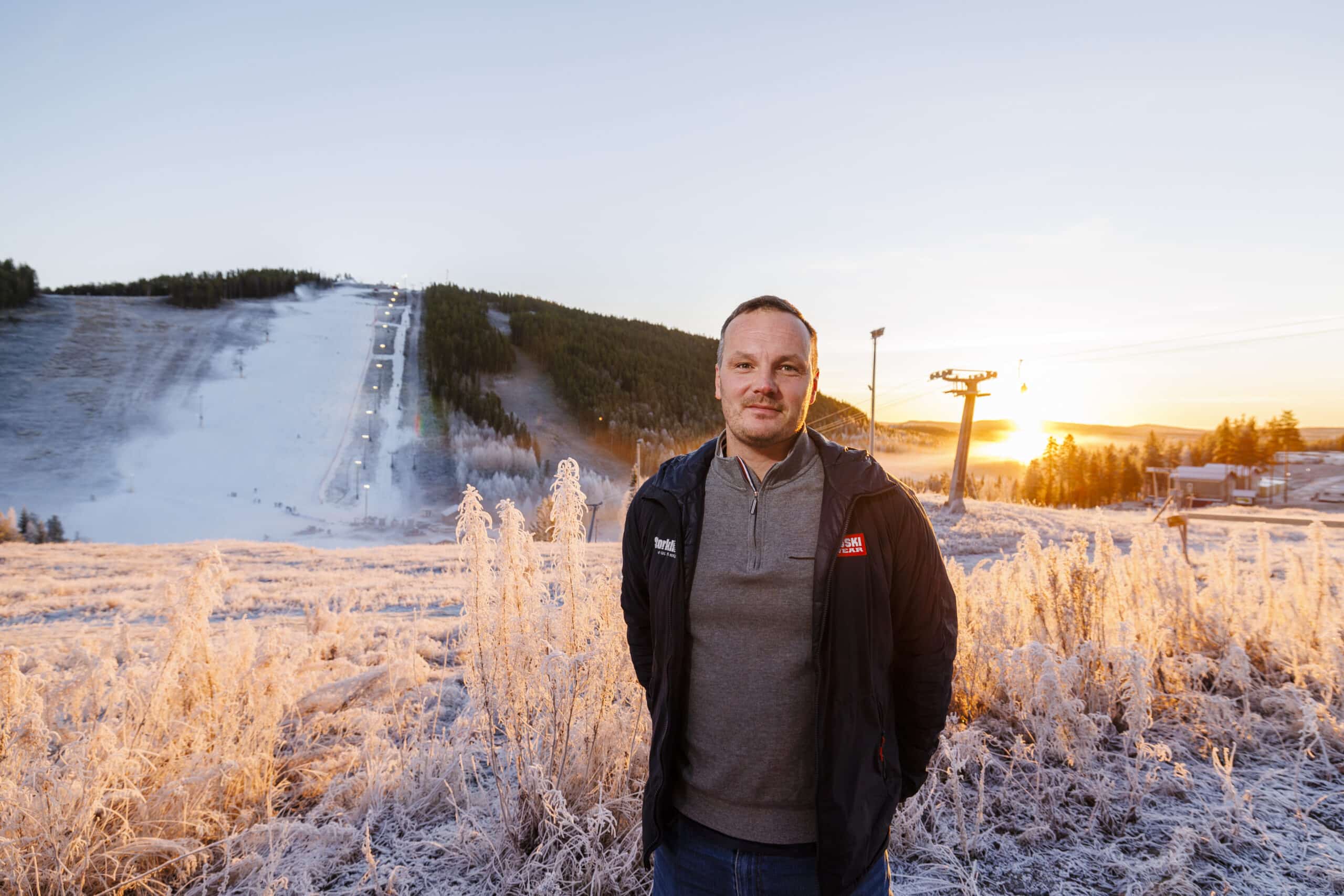